Work In Progress Backgrounds for my Muppet D&D game.


I had been planning on saving these until I got them finished (those tables are what's holding them up so far, but since +Jez Gordon declared today to be “Awesome Gamer Day, then I should least toss up a preview for the folks that are interested in this. 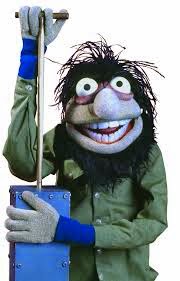 First up, and the most completed, the Mad Bomber. Since I'm going for a Muppet Show feel for some aspects of this game, I should mention that goblin bombs are not particularly dangerous, partly due to the goblins immunity to blunt damage. (it knocks out, rather than actually injures). When a goblin bomb goes off, there's a smokey cloud of soot, and most within its radius (around 5 feet) are knocked back or sent flying a short distance.
The inspiration for this background is Crazy Harry from the Muppet Show. This charming fellow would show up, and set off an explosion, and then there'd be some laughter.

Bombers do more than blow things (and goblins) up for humorous purposes, They also contribute to the well-being of Flopsburg by going fishing. A few well-placed bombs, and there's enough fish for a few days. The fish is the nearby Tenebrous Loch have adapted by multiplying on a larger scale than normal, thus preventing a potential loss of food for the goblins.


Up next are the Stick-Pokers, whose (potentially dangerous) job is to poke at things with sticks. (the areas around Flopsburg have a certain deadliness to them that can not be understated).

Many of them start out with long sticks, and those that aren't suddenly gobbled up by any number of unsavory things soon move on to shorter sticks, learning to rely on quick reflexes to avoid danger. Since most of them provide assistance to hunters and woodcutters (the goblins are constantly rebuilding Flopsburg), most soon learn how to field strip an animal, thus gaining the proficiency in the Survival skill. While that's the general idea of what I have thus far, I'm still considering other Backgrounds for the goblins, including a Storyteller/Performer Background.

Posted by Ashikaider at 1:02 PM