Further insight into the world of Muppet-inspired D&D

One of the bigger problems of doing a campaign using what's normally considered to be low-level fodder as the main player race for a D&D game is "Who do you use to to fill in that hole in the enemy selection/ecology/hierarchy?" It becomes even more difficult if you're considering using another low-level enemy type as a possible race for p,layers as well.

Well, I was looking at some Legend of Zelda fanart this evening, and inspiration struck as I looked at a pair of Moblins, who are one of the initial enemies in the original Legend of Zelda game.

So where am I heading with this exactly? Well, one of the big themes in the early Muppet movies is that they're all a bunch of free spirits who manage to get by, even if times are bad, and will go out of their way to help out others who might need a hand or some other experience. The villains, on the other hand, tend to be more established, and have a lot of resources. 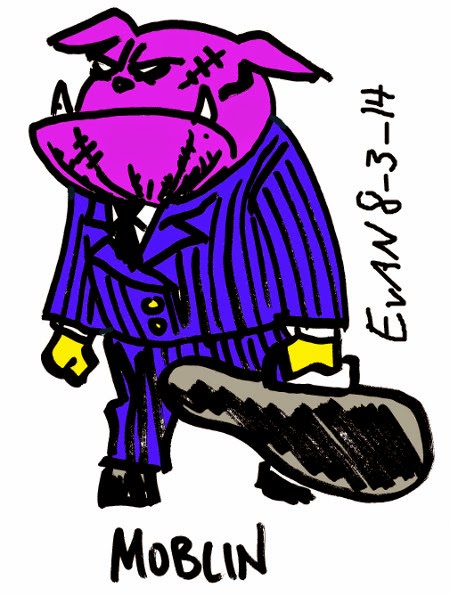 So what better enemy for a Muppet-Inspired D&D game than Moblins who are actual sterotypical gangsters, like this fellow over here on the right.
Now things were starting to fall into place. Moblins fall into the following categories;

Moblins, always looking for a new opportunity, are frequently visiting Goblin villages and towns looking to recruit or to find suckers for their latest scheme. They typically get blown out of town.

This has not endeared the goblins to the Moblins.

Thus the Moblins, when not trying to recruit or con the goblins, are frequently plotting to destroy the goblins villages, which is somewhat difficult as the goblins are doing an excellent job in that regard.

Most Moblins carry around instrument cases and use them as clubs, (which have little to no effect on the Goblins), but a few (very few) will keep a dagger or a shortsword in the instrument case.

If asked, the average goblin says that Moblins can be great fun in small does, but they tend to get borin very quickly.

Posted by Ashikaider at 8:07 PM