In my last post I spoke about coming up with ways to fill in holes that crop up when one decides to take enemy types and make them PC races. Well, when I was working on that post, I took a look at an earlier post I'd done about taking Ultraman monsters (some of whom inspired a number of classic D&D monsters) and using them as inspiration for new monsters.

Well inspiration struck again, and two the monsters became the impetus for the next two new enemy types for this campaign setting. When I was fleshing out the basics of goblin culture, I knew that they would have to go out into the wilderness outside of Flopsburg to get essentials like food and wood for fires and building materials. The only places to get wood are The Gibbering Bog and the Gloomy Thickets. The Bog was safer, but the quality of the wood wasn't as good, so the goblins would have to go into the Thickets to get wood.

When I was doing research into the Muppets, I read that when Jim Henson was planning the Dark Crystal, he wanted to do a fantasy story that was scary, and played for keeps. Well, I'd mention previously that one of  the backgrounds I've been working on is the Stick Poker, who pokes things with sticks to ensure the safety of the other goblins who went out to hunt or collect wood. 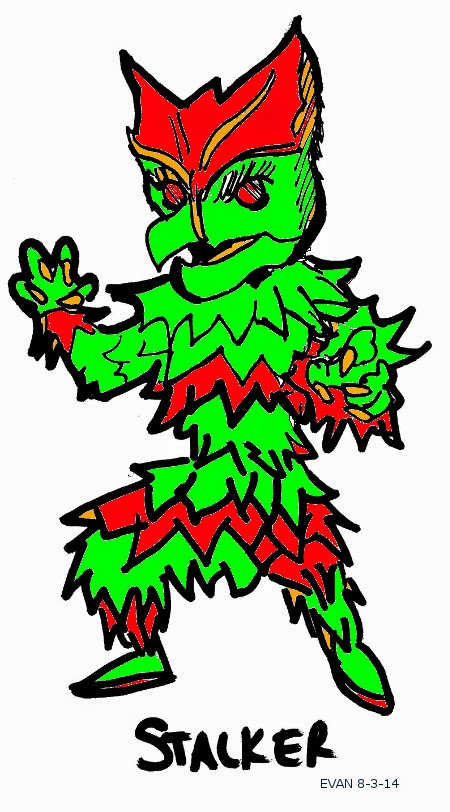 Well, in the Thickets, it's a very deadly, and somewhat scary place. The goblins started to poke at things when they started to get attack by Stalkers, who could collapse their forms and disguise themselves as piles of leaves. As the Goblins became wise to the tricks of the Stalkers, the Stalkers upped the ante by preparing various snares and pits to capture the unwary in.

Thus Stalkers can take the place of Kobolds with only a little tweaking.
(There is now a racial bonus for Stealth when Stalkers disguise themselves as leaf piles.


Despite the deadliness of the Stalkers, the goblins rose to the challenge, and now actually enjoy the game of cat and mouse between to the two races that can change at a moment's notice. (Plus it gives the bombers someone else to throw bombs at). 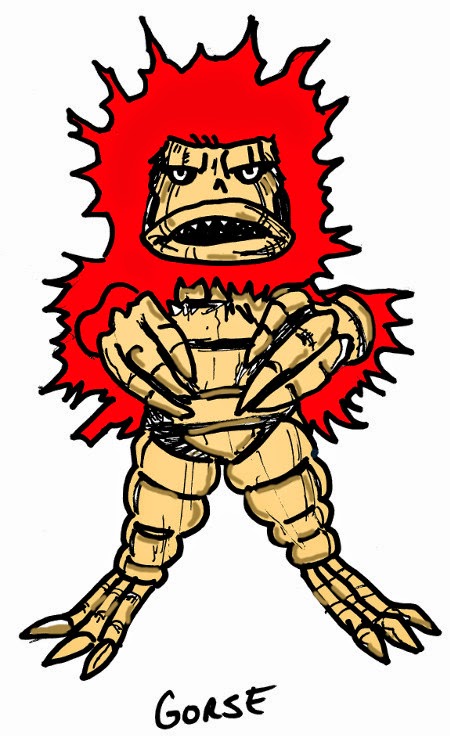 On the other hand, when a Gose shows up, it's whn the goblins begin to feel fear.

With its ability to diguise itself as a large bush or a small tree, a Gorse can be more difficult to spot than a Stalker. Also, when it attacks, it can extend its claws, and if both hit, then the victim is entangled. One Gorse is a terrifying opponent, but if two or more show up, even the bravest of goblins know when to turn tail and get out ot the Thickets (preferably with large number of bombs to help cover their trails).

However, if the goblins can fell a Gorse with as few casualties as possible, then the wood of the Gorse can be used for a number of items and as building material. Gorse-bark armor is a highly prized commodity in the goblin communities.

Despite the ever-present dangers of the Thickets, the goblins have not let it dampen their spirits, and their culture continues on without fear of extinction.

Posted by Ashikaider at 8:10 PM